In a recent post, we outlined a technique of proving that a hidden value was greater than a given threshold without revealing it: “proof of balance”. Our method used an implementation of a general zero-knowledge framework, called a zkSNARK (courtesy of the pepper project). While immensely powerful, those of you who have played with zkSNARKs are likely quite familiar with its drawbacks in terms of efficiency and ease. Here we present a much simpler protocol to prove in zero-knowledge that an integer (such as age or balance) is greater than a known threshold.

The larger insight for the zero-knowledge aficionado is this:

There are lots of efficient, specialized protocols for proving something in zero knowledge. If you can’t find (or develop) one for your specific need, zkSNARKs can come to the rescue. However, most of the time, it’s worth looking for that specialized solution. At least twice.

Let’s say Milena (who listens to 80s music and is clearly in her 30s) has been riding around town on her brand new yellow spotted tandem bicycle. Paula is dying to cruise around town on Milena’s bicycle and asks Milena out on a date. Milena is interested, but unsure of the legality of their potential adventure. If Milena and Paula have access to a trusted source of digital identification documents (their local government, for example), we would like them to have an easy “challenge and response” protocol, like the following:

Milena sends Paula a challenge: “Prove you are at least 18”

Milena verifies the response is correct: “Ok, I am convinced”

We could implement such a system with the following protocol, from a paper by Sebastian Angel and Michael Walfish. An overview of the protocols follows, but if you don’t care about the details, just skip to the end for the demo. 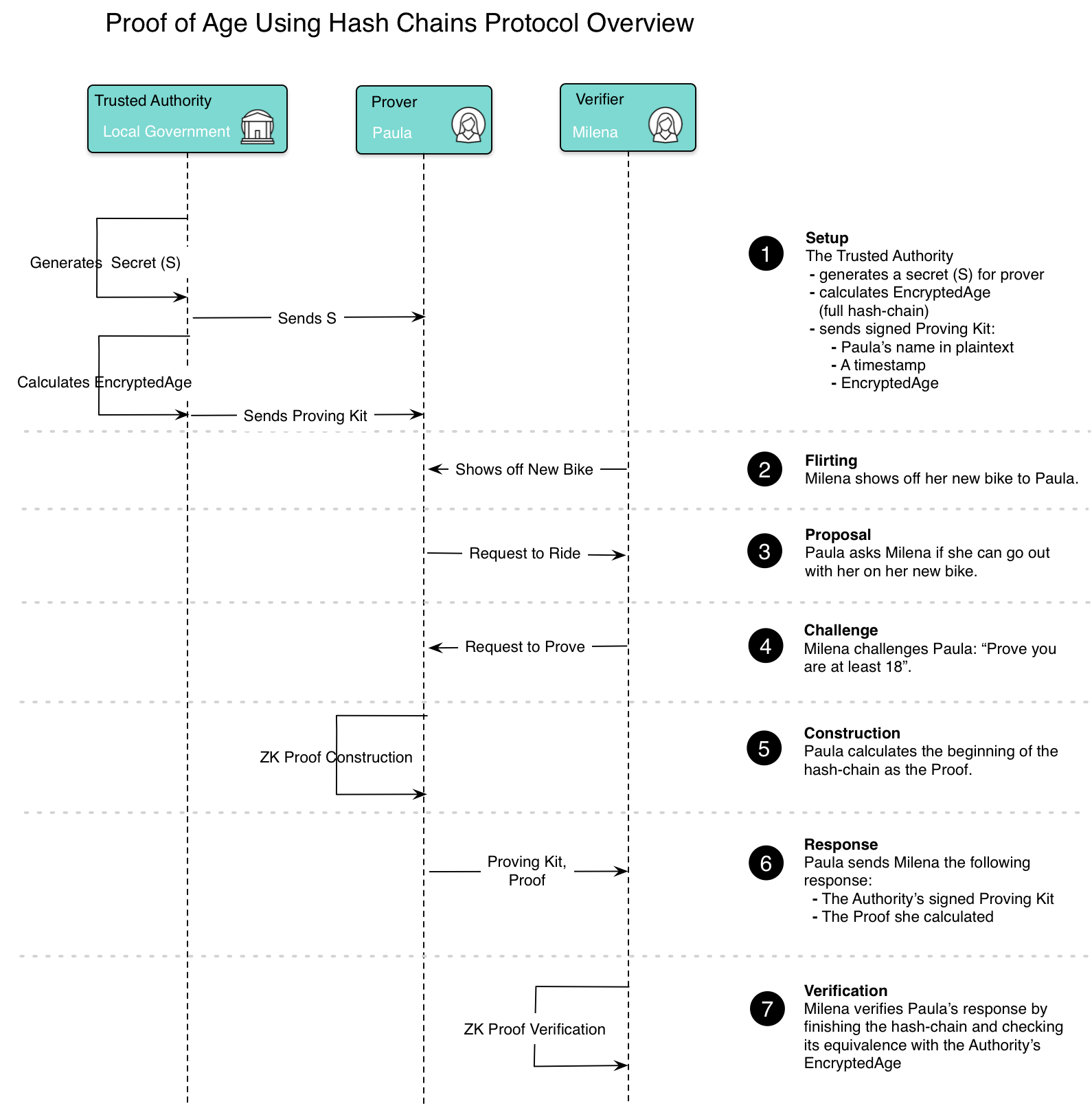 If Paula is 19, the Authority would compute 20 iterative hashes to go from S to EncryptedAge. As good cryptographic hash functions are not easily inverted, it would be difficult for anyone to deduce S or the ActualAge from the EncryptedAge. This means we can distribute the EncryptedAge as needed, without fear that our ActualAge will be discovered. If we choose SHA-256 as our hash function, the intermediate links in the hash chain would be:

and the final link in the chain, the EncryptedAge, would be:

Paula, who is 19, receives Milena’s request to prove she is at least 18 years of age (The AgeToProve)

Milena, of course, could just as easily use this protocol to evaluate the sufficiency of Paula’s monthly salary or the size of Paula’s vinyl record collection, if they could agree on a trusted certification authority. Either way, the protocol should guarantee its users completeness, soundness, and zero-knowledge, all of which we will see in the next section.

This protocol is only useful if it

For any age AgeToProve>ActualAge, Paula would have to invert HASH(S) to send a convincing Proof. The exception to this is for AgeToProve=ActualAge+1, in which case Paula could just send S. However, as the format of S is publicly known, a watchful verifier would detect the fraud (and, in addition, be able to answer future challenges on Paula’s behalf)

Note that even if ActualAge=AgeToProve, Milena would learn nothing, as the Proof=HASH(S)

And now, for the Live Demo!

We have put together a javascript implementation of this protocol for recreational purposes. The code is available on github.

If you don’t trust the “verification” step above, you can complete the hash chain yourself by (repeatedly) using either of the following tools with the hexadecimal proof value from the demo:

Trust in human society is a complex issue and even a good cryptographic hash function won’t solve the entirety of the problem. However, in the context of signed messages from trusted sources, Angel and Walfish’s approach can help share only the desired property about our hidden data (in this case, whether the age is above a threshold) without revealing the data itself.

For other numbers (like a bank balance), significantly more computation may be involved, as the hash chains could have millions of links (or more). While specialized hardware for hashing does exist, the relevant Authority could also encode metadata in its signed message (the units of the encrypted value for instance) that optimize for the desired use-case.